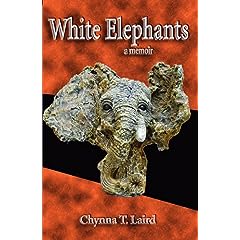 White Elephants is the story of Chynna Laird’s childhood with an alcoholic, bipolar mother.  Not for the faint of heart, this memoir is a gripping tale that Laird colorfully paints for those unfamiliar with what it is like to grow up in this situation.

This review’s opening paragraph comes from a story in the first chapter. Laird overhears a phone call between her grandmother and her mother.  Her mom is drunk and on one of her many “vacations” and Laird’s grandparents are taking care of Laird and her brother, Cam.  Five-year-old Tami (the name Laird went by for most of her life) hears her mother say on the phone, “I don’t want them.”  This scene sets the stage for the drama that plays through the rest of the book.

No one seemed to understand the manic behavior and profound depression of Tami’s mother, Janet. Janet’s siblings and parents were constantly at their wit’s end. Laird describes several points when her mother was clearly actively suicidal.

Living in a chaotic home filled with binge drinking, verbal and physical abuse will leave its mark on a child.  Tami was molested and raped in her own home.  She and her brother started drinking at a young age and were both involved in drugs at various points.  They both struggled with anger.  Cam raged on the exterior, punching walls and sometimes turning on their mother, whereas Tami unleashed her anger on herself.  She was known among other high school students for crying when she was drunk. By the age of 15, she had begun cutting and even attempted suicide one night.  As she grew older, Tami struggled with her self-esteem and developed bulimia.

In hindsight, Laird is able to recognize the “angels” who played a role in her life.  She and Cam were close to their grandparents, who practically raised them. They were the only real parents that Tami had ever known and their influence was prevalent through most of her life.

Her stepfather, Pat, rescued her many times from herself and from her mother.  At 15, Tami was drunk at a party and had to call Pat to pick her up.  When they got home, he hugged her and told her he was not going to ask what happened.  “I just wanted you to know I’m glad you’re both home safe…You’re better than this, Tam.  You’re better than she is.”

However, when Tami finally realized that she needed help, she turned to her godmother, “Auntie Lois.”  Tami moved in with Lois and her family and began a daily ritual of having tea with her aunt.  Over tea, Lois would patiently listen while Tami spoke about the trauma, the alcohol, and all of the other dark secrets that she had been carrying for so long.  This was the turning point for Tami:

In that moment, as I felt Auntie Lois hug me – a person who really believed me, a person so close to God she could be considered an angel – the flood gates opened and I cried.  I cried for the little girl I never was.  I cried for all the times I hurt but couldn’t react.  I cried for not having a mother who loved me the way she wanted to.

White Elephants touched me much more than I expected.  Laird says that she wrote the book in hopes that it would help someone who has been in a similar situation.  Because she could not help her mom, she hopes that someone can find some help in her story.  Although I have not been through the trials that she has, her strength and determination to not allow her mother’s abuse to determine her future is admirable and inspiring.  The moment I began reading her book I could not put it down.  Moreover, after finishing it 24 hours after I started it, I was ready to read it again.  There are not enough adjectives to adequately describe White Elephants: inspiring, tragic, heroic, admirable, honest, and deeply moving.  There were points when I found myself crying along with Tami and others when I was cheering for her on the sidelines during her recovery.