Reviews Home » Wicked Success Is Inside Every Woman 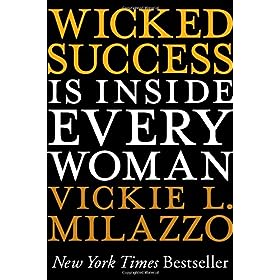 In 2006, Vickie L. Milazzo wrote Inside Every Woman, which became a Wall Street Journal bestseller. Five years later, her publisher, John Wiley & Sons, asked her to write another book giving life and career advice to women.

Her first reaction, she says, was to say no — she is a multi-million-dollar business owner, working CEO, and she begins her book by saying that she doesn’t “write how-to books or give motivational speeches for a living” — but she realized that, especially now, women are in hard times. And, she says, she decided to help.

Wicked Success Is Inside Every Woman is written to address the critical situations women might find themselves in during a recession. It is designed to help make some of the aspirations from the author’s last book more concrete. Milazzo admits that pre-recession questions such as “What would your life look like if every moment of it was absolutely enriched, fulfilled and swelling with joy?” suddenly felt “Pollyanish” to her, so she set out this time to instead help women “get out of survival mode and into success mode.”

With a sense of humor and the bottom line of a businesswoman, she addresses women’s everyday predicaments (earning less than males doing the same job; supporting parents and “return-to-nest” children; trying to struggle though jobs that don’t cover life’s necessities) with practical, tried-and-true advice. And, surprisingly, that advice works.

The core of Milazzo’s belief is that women should make five promises to themselves. The promises, as set out at the beginning, are: “I Will Live and Work a Passionate Life;” “I Will Go for It or Reject it Outright;” “I Will Take One Action Step a Day Toward My Passionate Vision;” “I Commit to Being a Success Student for Life;” and “I Believe as a Woman I Really Can Do Anything.” These seem relatively straightforward, but are intertwined with the author’s tales of how she built her own multi-million-dollar business and how these mantras helped her survive the recession.

Despite what we may think, Milazzo states that this is “not a self-help book. It isn’t a magic formula, a quick fix for success.” She writes later, “this is a buck-up book with a buck-up plan for women who are ready to buck-up.” While the writing is very conversational, and includes many of her own and others’ real-life anecdotes, it is practical and to the point. The personal narratives are brief and buttress her advice. Several chapters of the book address Milazzo’s core “feminine forces”: fire, intuitive vision, engagement, agility, genius, integrity, endurance, enterprise, renewal, and fusion. She refers to the “five promises” throughout to help women get in touch with and develop their natural abilities.

At one point, Milazzo writes, “don’t just break the rules, make your own rules” — and this seems to form the motto for her entire book. She gears her work specifically toward women because, she says, she’s seen women succeed in the business world, but lose some of their femininity, as if they adapted to a man’s world. She wants to see women succeed through being more in touch with their own energy — to make their own rules and live by them.

Be ready when you jump in to the meat of the book. Milazzo is serious about success, and you should be too while reading. She includes workbook-like sections in each chapter, so be ready to make use of them. This book calls for action. The author wants her “five promises” to become part of your consciousness, as she repeatedly demonstrates how remembering these ideas got her though tough times, especially the recession, and helped keep her focused on personal goals (rather than career offers that were financially tempting but that would have required her to give up on her dream).

I honestly didn’t expect to be sucked in to Milazzo’s narrative, but I found her story uplifting and especially helpful during a time when the “perfect career” seems far out of reach. If you feel like you are struggling in your current financial situation or job, Vickie L. Milazzo is a great friend to have. She is considerate, but she won’t let you wallow. She marries practical applications with positive feminine energy to help you become the confident woman you deserve to be.