Reviews Home » Parenting » Will I Ever Be Good Enough? Healing the Daughters of Narcissistic Mothers 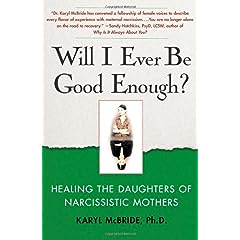 Will I Ever Be Good Enough? Healing the Daughters of Narcissistic Mothers

The daughters of narcissistic mothers have been raised by primary role models who lack the fundamentals of mothering.  Conditioned to care for their mothers rather than the reverse, these women suppress their identities at their own peril.  In Will I Ever Be Good Enough?: Healing the Daughters of Narcissistic Mothers, Dr. Karyl McBride draws from her 28 years as a therapist and from her own experience as such a daughter, creating a guide that is at once rigorous and deeply personal.

The book is geared toward women whose self-involved mothers possess anything from a few narcissistic traits up to the full-blown disorder.  Narcissists lack empathy, which tops McBride’s list of parenting skills.  She injects that empathy into her writing, adding her own stories to those of her clients and offering validation and encouragement to her readers.  Her compassionate tone combines with the book’s well-developed structure to make it both engaging and authentic.

McBride focuses specifically on the mother-daughter dynamic because “A narcissistic mother sees her daughter, more than her son, as a reflection and extension of herself rather than as a separate person with her own identity.”  The resulting damage ranges across the socioeconomic spectrum, from drug addicts on welfare to CEOs.  The book’s three sections show how maternal narcissism affects individuals and their families, how those effects manifest in a daughter’s life, and how recovery from those effects is possible.

Offering clear explanations and step-by-step guidance, McBride first builds on narcissism’s clinical definition.  She matches its nine traits to examples and specific behaviors exhibited by mothers with this spectrum disorder.  From there, she introduces sub-types, such as the engulfing and the ignoring mother; and six categories of narcissistic behavior (e.g., the flamboyant, secretly mean, and psychosomatic).  Such mothers view their daughters, first and foremost, as competitors.

Maternal narcissism and its attendant envy derail any genuine mother-daughter bond and short-circuit a daughter’s ability to become an independent, confident woman.  Not only is much expected of these daughters, but their attempts to meet those expectations go unrewarded at best and are punished at worst.

McBride also connects maternal and societal narcissism.  “In some middle- and upper-middle-class families, it was customary for a girl to receive a car for her sixteenth birthday.  Now, in many circles, the coming-of-age gift is a breast implant.”  When combined with society’s glorification of motherhood, such emphasis on appearance further fuels the pain caused by this disorder, turning daughters into objects.  I was particularly struck by her observation of bumper stickers that extol achievement alone.  She asks, “Where are the bumper stickers that say ‘My kid has a big heart,’ ‘My kid is honest,’ ‘My kid is kind’?”

Growing up with a narcissistic mother makes women high-achievers or self-sabotagers, though McBride points out that all such daughters sabotage themselves.  The motivations of these two types are not mutually exclusive but stem from a common denominator: “Both have internalized the message that they are valued for what they do, rather than for who they are.”  In this way, learned responses, such as dependent and codependent behaviors, can swap places or act in combination with each other.

This flexibility forms an important backbone to the book.  McBride illustrates the many ways in which damage from maternal narcissism can manifest and can change to fit different circumstances.  She makes sense of behaviors that often seem crazy-making and contradictory, tracing them to a daughter’s underlying belief system that love means “pleasing another with no return for herself.”

The parental hierarchy and boundaries one finds in a healthy family are missing in a family where everyone revolves around a narcissistic mother.  Furthermore, that dynamic is kept secret because how something looks is treated as more important than how it feels.  Daughters raised in an environment lacking unconditional love, empathy, and security seek to fill that void however they can.

McBride draws on case examples, literature and film, and her own life to illustrate the toll these distortions make on a daughter’s physical and mental health, work life, love relationships, and parenting ability.  A powerful filmography supplements the bibliography in her robust reference section.

In her longest section, that on recovery, she emphasizes that the mother’s diminished parenting ability did not occur in a vacuum.  “[O]ur mothers weren’t born this way.  They most likely faced insurmountable barriers to love and empathy when they were children.”  Moving forward in recovery depends on accepting the mother’s limitations and grieving the love she could not give.  This forms a crucial step, not least because the daughters of narcissistic mothers blame themselves for the love they did not receive.

These daughters must separate themselves from the mothers with whom they’d been entangled.  They must learn to set the boundaries denied them in childhood.  They must, in fact, learn to mother themselves, building their strength and self-confidence from the inside.  Often called “the sensitive one,” the daughters of narcissistic mothers are more prone to what McBride calls “the collapse,” reliving childhood wounds cued by external situations.  By using an “internal mother” who replaces negative messages with positive ones, daughters can learn to draw on their own best instincts to give themselves the validation they’d grown up craving.

They can then draw on this inner strength when dealing with their mothers, their partners, and their children.  Checklists in the recovery section help daughters discover their own wants and needs, and also the ways in which they themselves might be narcissistically impaired.

I have two quibbles with this otherwise excellent guide.  First, McBride recommends Eye Movement Desensitization and Reprocessing (EMDR) exclusively in her section on recovery.  I am not qualified to evaluate EMDR, but I would have preferred that McBride phrased her recommendation within the context of her own practice, rather than as a generalization.  The website she references states that “EMDR has been found to be relatively equivalent to [Cognitive Behavioral Therapy] in seven randomized clinical trials that compared the two approaches.”  I feel that focusing exclusively on EMDR may disadvantage women who, for whatever reason, might not have access to a therapist trained in that specialty.

Second, McBride states in the final chapter that her use of the pronoun “he” is for convenience only and is not meant to limit her discussion to heterosexual love relationships.  I would have liked to see this disclaimer at the midway point, beginning in what I had perceived to be an exclusively heterosexual chapter on romantic fallout.  As someone in a long-term same-sex relationship I was more attuned to this omission, especially in a book as inclusive as this one.

That said, I found this book to be a comfortable and comforting read that I would recommend to both its primary audience members and their loved ones.  Therapists could also benefit, though the book is not written for clinicians.

Will I Ever Be Good Enough?: Healing the Daughters of Narcissistic Mothers

Will I Ever Be Good Enough? Healing the Daughters of Narcissistic Mothers

APA Reference
Malcohn, E. (2016). Will I Ever Be Good Enough? Healing the Daughters of Narcissistic Mothers. Psych Central. Retrieved on September 28, 2020, from https://psychcentralreviews.com/2016/will-i-ever-be-good-enough-healing-the-daughters-of-narcissistic-mothers/