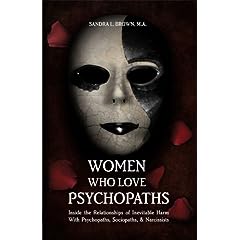 This book has many reasons to recommend it. Two are most powerful. First, its postulation through neuroscientific indications that the psychopath’s brain is genetically different from his fellows and so he cannot change is paramount to letting go. Not understanding this, the victim is drawn, over and over again into the “vortex” of his power play. The term psychopath is used in the book to describe most of the “low/no empathy and conscience diagnoses” (p. 19). Further, the author delineates her hypothesis with a nature v. nurture debate regarding whether people become or are born this way. It is compelling.

The second, powerful hypothesis that Ms. Brown asserts is regarding the “Super Traits” (p. 206) of the victim that dovetail with the psychopath’s. It would seem that the stronger and more independent the woman is, the more challenge and usefulness she provides for the man behind the mask. The psychopath is an opportunist as well as a sadist (in varying degrees). His parasitic lifestyle depends upon the strength of his victim and oftentimes her wealth. He will have many relationships to be certain that he always has a fresh supply of whatever he feels his needs are. The stronger woman will last longer. And yet, even after he has broken her, victims have reported that they have heard from these men a year or even ten years later. Many a woman will ask herself how this debacle happened; the book will give her a blow-by-blow description. And identifying the issue is a powerful way to begin a healing journey.

At first, it concerned me that the author began with the explanation of the psychopath. After all, this book states “for the first time, a book about her…” on the back cover. The beginning of the book endeavors to show exactly what we are looking at with this man’s label in medical and psychiatric terms. It is a long and dry slog through, but if the reader is persistent, it forms a firm basis for understanding how the author has built her victim description upon it and supports her findings.

Throughout the book, the author describes and gives clear examples of the way he stalks and woos his prey. He “flies under the radar” of law enforcement and her own self preservation (the dichotomy between the pull of his charisma v. her loathing of him; intense attraction; even trance and suggestibility). Ms. Brown goes through the entire relational cycle, and then gives indication of the stages of leaving and, as a warning, the danger to watch for: he doesn’t let anyone go. She will need help. It is interesting to note that, since many psychopaths elude police, studying the victims will give a more accurate account of just how pervasive the problem is, as the author points out.

Although the reading is peppered with quotes from the victims Ms. Brown worked with, I do think that the longer-version stories of the women should be nearer to the front. In reading them where they are in the book, it felt as it they were just tacked on as an afterthought and it struck a dissonant note with me. It was also depressing because none of the stories ended with recovery. I would have liked to have seen some references from former clients (names withheld, of course) of the Institute that the author mentions, numerous times, in the book. While I understand that you cannot heal from this kind of damage from reading a book and so no suggestions should be made how to do so, it would have served the purpose better by having some comments from those who have gone through and beyond to give hope and strength to those who were looking toward that road.

Another criticism is the “Resources” page where only the author’s Institute for Relational Harm Reduction & Public Psychopathy Education was listed. It is possible that victims in different parts of the United States and even other countries cannot possibly avail themselves of this one facility. It is also possible that the Institute would be inundated and unable to handle all of the requests. Ironically, a person who interviewed Ms. Brown, Susan Murphy-Milano of the radio broadcast “Time’s Up!” has helped many victims herself. A problem like this requires a network, a consortium of dedicated people who can advise and guide victims to the best place to start their healing.

Last, the brief pages regarding the inevitable harm regarding children could best be served in another book entirely. Written as they are here, it almost serves as guilt-inducing to the victim, who as Ms. Brown correctly states, is a tattered remnant of the person she used to be.

Still, this book does accomplish what it set out to do: describes who he is; who she is; who they are when they intersect. Armed with this basic premise, the author clearly explains the developing relationship and the “inevitable harm” syndrome that will surely result. A victim within the cycle may see herself and reach out. Certainly one who is in the latter stages could see more clearly and the victim who has managed to get away (at least, physically) can put a name to what has happened to her and search out support to heal. While naming something can give it power, the naming in this book demystifies and gives the victim power to, eventually, become a survivor.