Reviews Home » Your Brain After Chemo: A Practical Guide to Lifting the Fog and Getting Back Your Focus 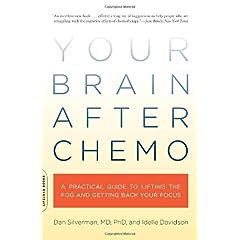 Your Brain After Chemo: A Practical Guide to Lifting the Fog and Getting Back Your Focus

For those who are preparing, experiencing, or just finishing chemotherapy and are interested in how the treatment may affect their brain, and for those who live with cancer survivors who suffer cognitive setback, this is an excellent book. The authors explore an often-ignored and discounted side effect of chemotherapy – the problems with cognition that emerge and may remain even after the physical problems disappear. Supported by scientific research and personal stories, including Davidson’s own experience with cancer, both authors make a compelling argument that the brain often is different after chemo: Patients’ memory, concentration, multitasking, and word retrieval skills may be not as sharp as before. After describing the seriousness of this problem, the second half of the book offers some hope by listing some strategies and a nine-step program to improve the working of the brain.

The book is organized as follows:

In Part I, the writers describe how oncologists  may not explain the possible serious problems of memory and concentration that linger even after treatment. Because not every doctor is familiar with the latest studies about chemotherapy and brain functions, they sometimes invalidate and trivialize patients’ complaints. If you are a patient who feels that you have cognitive decline and are wondering if it is just your imagination, reading these three chapters would validate your suspicion that the cognitive change is real. The writers note that studies to date have not found to what degree chemotherapy causes the cognitive decline, but it seems to be responsible for at least a part of it. Because oncologists are the main contact for patients, the book goes into detail on how to talk to oncologists, what the oncologists may say, how patients can ask for more information, and what current research says about post-chemo brain.

In Part II, we learn more about the symptoms and signs of the cognitive changes and the seriousness of it through stories and research data. The book refers to a survey in which of 471 chemo patients, 92 percent indicated that they still experienced cognitive changes after treatment ended. Both patients and their families reported frustration due to the cognitive change – the forgetfulness, the inability to hold the same job as before, the lack of impulse control, etc. In order for us to understand the functioning of the brain better, the authors explain the working of our executive functioning, language, information processing, attention and memory. It also talked about fatigue, depression, and anxiety and how they are linked to fuzzy thinking. This section ends with information on the current evidence. Again, I found the writers here were very validating of the struggle of the patients and their families. One section of the book is appropriately titled “Cancer Affects the Entire Family, So Does Cognitive Dysfunction.” I think that statement is very true.

In Part III, the book goes deeper to the functioning of the brain. It starts with a chapter on what a healthy brain looks like, followed by an unhealthy one, and ends with an explanation on the interplay of hormones and the brain. The nitty-gritty details about the brain were interesting and important, but I admittedly need to say it’s dry for somebody likes me who can never remember what parietal, temporal, occipital, frontal, cerebellum lobes do, even with a nice illustration of the brain in the book. The chapter about hormones is back to something that I can understand. The authors proposed that because after treatment some patients may produce lower levels of hormones and because these hormones affect cognitive functioning, it is important for patients to understand and get used to the shifts. This way, patients can take steps to improve their brain function, which brings us to parts IV and V of the book.

In Parts IV and V, the authors suggest how to get the brain back on track. Part IV has chapters on tackling depressing days, sleeping through insomnia, handling fatigue, inattention, and poor concentration, using mindfulness with fear and stress, eating well, and general tips on organizing daily life. Part V has chapters on specific steps you can take to get the best of life. A nine-step program that includes managing thoughts, eating healthily, and exercise seems like a holistic approach to me. I also found the last step – avoid doctors, drugs, and hospitals if you can, and get preventive health care – interesting. I think in general this book has a slight sense of mistrust in the medical establishment in its ability to give emotional support to cancer patients. Finally, the book concludes with what we can expect from the next decade. In my opinion, this is a nice conclusion for a book on a topic that is heartwrenching.

Overall, I think this book provides a detailed picture on what can happen to the brain after chemo and what can happen to the person and the family who have to endure chemo treatment. The writing combined medical information, psychological information, and personal experiences to explain this important but often ignored topic. Because this book tries to balance between being scientific and conversational, the scientific data feels mechanical and takes me away from the easiness and warmness of reading the more conversational part of the book. This transition sometimes feels a bit disjointed to me. The most valuable message that I get from this book is that when somebody has cancer, the focus is on destroying the cancer and sometimes it makes us discount the possibly serious cognitive side effect the treatment causes. This book makes people more aware of this cognitive impairment and by being aware, they can take charge of their life better. Since family and caregivers will also be affected should one suffer this cognitive impairment, I think the book is best read together by the patients and the family or caregivers so that they are prepared for the road ahead.

Your Brain after Chemo: A Practical Guide to Lifting the Fog and Getting Back your Focus

Your Brain After Chemo: A Practical Guide to Lifting the Fog and Getting Back Your Focus

APA Reference
Wangsa, M. (2016). Your Brain After Chemo: A Practical Guide to Lifting the Fog and Getting Back Your Focus. Psych Central. Retrieved on October 26, 2020, from https://psychcentralreviews.com/2016/your-brain-after-chemo-a-practical-guide-to-lifting-the-fog-and-getting-back-your-focus/